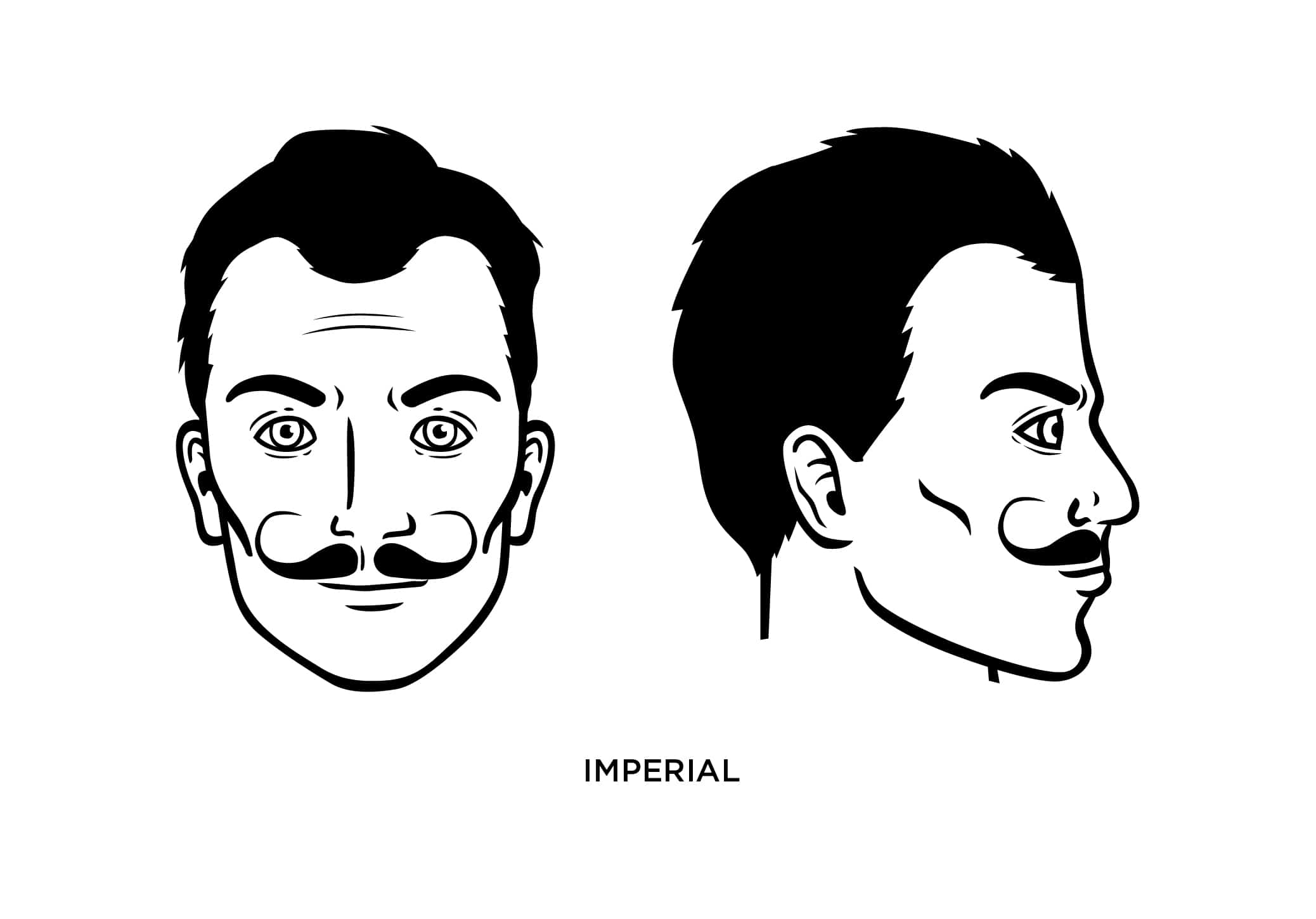 The Imperial mustache is another bold, full mustache style of the same family as the Chevron and Walrus. It’s not easy to obtain, but it will give you an air of royalty and authority, and it’s a daring look.

Kaiser Wilhelm, the last emperor of Germany, was famous for the mustache and he’s acknowledged as the reason how the Imperial got its name. What is it?

It consists of a thick mustache that’s complemented by hair grown on the upper cheeks all the way up to the cheekbones. The outer edges of the Imperial are twisted upward like the Dali, but without the waxing and twisting.

If you have thick, coarse hair on your upper lip, then you’re a good candidate for the Imperial style.

What the Imperial Mustache Says About You

If you’re wearing the Imperial, you don’t mind making a bold statement, and you have a strong sense of confidence in yourself.

In fact, your confidence can be mistaken for egotism if you’re not careful. You’re not afraid to speak you mind, right or wrong, and you’re not easily dissuaded from your opinion.

The Imperial Mustache is one of those looks that does say something about you, but it isn’t always an accurate portrait of who you are as a person. The truth is: people who choose this style aren’t trying to send any specific message at all—they just like how it looks on them and they want to rock it!

The Imperial works well with a large or square face.

The face shape best suited to an Imperial is square with a strong jawline. This will allow you to grow out your hair without worrying about whether or not it looks good on you — and if you have these features already then growing your facial hair into an Imperial should be easy enough!

How to Grow the Imperial Mustache

Step one in the Imperial mustache growing process is letting the hair on your upper lip and cheeks grow – and grow some more. It’s a step that could take a couple of months, so hang in there.

Because growing a tuft of hair on your upper cheeks might look a bit strange, you may opt to grow a full beard as your waiting for the Imperial to reach maturity.

It’s important to let the ends of your mustache continue to grow because you’re going to eventually have to train them to grow outwards. Getting longer ends can take time, but be patient and don’t trim the ends during the growing process.

You’ll also need to be patient with your other mustache hairs; you’ll want them to grow over your upper lip, and this can be a bit uncomfortable (or ticklish) at first.

Once you’ve achieved suitable Imperial length, you can begin the process of training the ends to grow upward. To do this, you’ll need mustache wax and a good comb.

Note: You can even begin this process much sooner by wetting down your mustache and combing the hairs in the direction you want them to go. But you’ll need to use wax once the hairs become full-length.

Generously apply wax throughout the mustache (while adding a little extra on the ends). Remember, you don’t want to twist the ends as you would with the Dali style.

Kaiser Wilhelm, the reputed originator of the style.