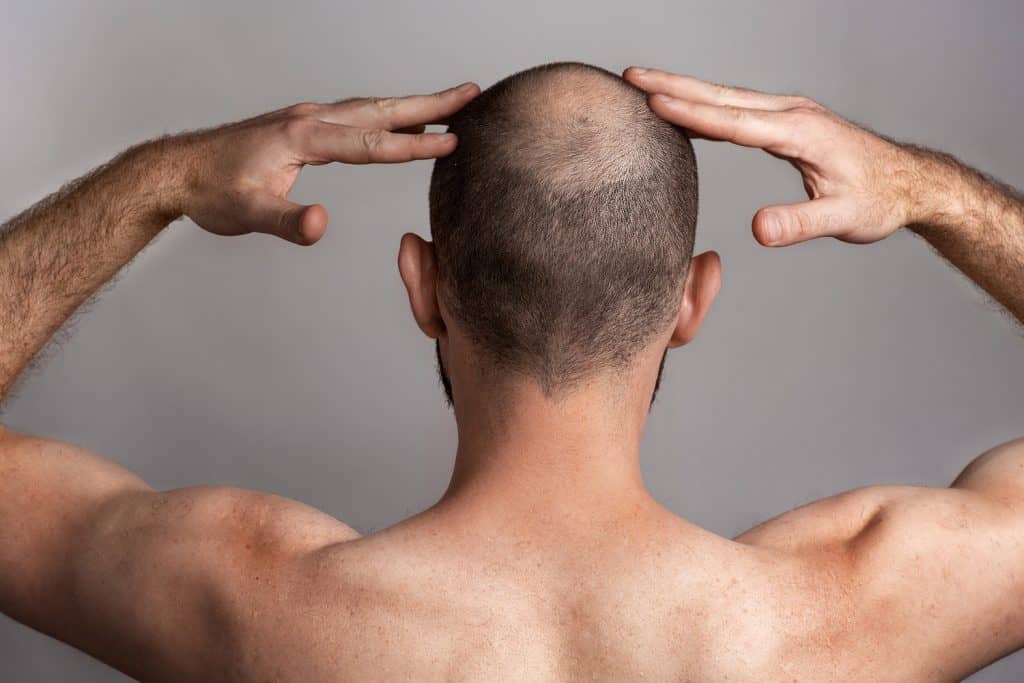 You only have to look around you, or in your mirror, to see the effects of hair loss. But even if you know how common hair loss, is the numbers may still surprise you: 35 million men and 21 million women suffer from hair loss in the U.S.

For most people, hair loss is out of their control as genetics, age, and other factors contribute to thinning hair and, eventually, baldness.

That’s why hair loss products such as minoxidil and nanoxidil are so popular – because they can fight the effects of male and female pattern baldness while reducing the emotional distress associated with it.

We’ll discuss minoxidil vs. nanoxidil in this post while showing what they do to treat hair loss. We’ll also look into other factors, including the hair growth process.

Minoxidil vs. Nanoxidil: The scientific difference

While minoxidil and nanoxidil are different (and the same) in a lot of ways, a key difference is in their molecular structure. Nanoxidil has a similar molecular foundation as minoxidil but it has one less carbon chain.

In turn, that gives nanoxidil a larger molecular weight than minoxidil – which means it has a greater skin absorption capacity, as well.

Another key difference is that minoxidil focuses on treating the vertex (crown) area of the scalp while nanoxidil treats both the vertex and the hairline. The latter is good news for the many men who have a receding hairline.

A couple of things you can say about minoxidil from the beginning:

The Upjohn company – now Pfizer – created minoxidil in the 1950s as a way to treat ulcers and hypertension. But one of its interesting side effects was that it promoted hair growth.

From there, the rest was history as scientists channeled this information into creating a solution for fighting male pattern baldness.

One of the many interesting things about minoxidil is that scientists don’t quite understand how it works for stopping hair loss and promoting new hair growth.

But it’s considered a potassium channel opener which, in short, widens blood vessels and improves blood flow to the scalp.

As a result, minoxidil allows more blood, oxygen, and nutrients to hair follicles to help make them healthier and more able to thrive.

Hair that’s in the telogen phase of the hair growth cycle – which we’ll touch on a bit later – sheds and is replaced by thicker hair in the anagen (growth) phase.

Minoxidil primarily treats the top of the head (vertex), not the hairline. But it remains the most popular hair growth agent for men and women.

Minoxidil works by increasing blood flow to the scalp, which delivers more nutrients to the follicle that produces hair. The increased nutrient supply allows hair to grow longer than it normally would at its current rate of growth.

While scientists may not know exactly how minoxidil works, enough studies show that it does work. In a clinical study conducted by the FDA, 26% of men experienced moderate to dense hair growth by using the 2% minoxidil treatment for four months.

Other studies show that even better hair growth results when using the 5% minoxidil version. Which leads us to our next topic:

You can purchase minoxidil in either the 2% or 5% versions. The percentages indicate the amount of minoxidil contained in the product. The FDA approves both versions, but nothing above 5%.

While the 5% version is available to men, it’s not recommended for women because it may cause unwanted hair growth on other parts of the body.

What’s better? As you might expect, a larger dose of minoxidil has a greater impact on hair growth; one study showed that 5% minoxidil produced better results than the 2% version – up to 45% more hair regrowth in some participants.

The study even showed that participants had more positive psychological impressions of hair loss when using the 5% version.

The 5% minoxidil and 2% are the same in that neither is good for restoring growth or preventing hair loss along the hairline. Also, minoxidil isn’t effective if you have significant hair loss. It’s best for men or women over 18 who have gradually thinning hair.

Minoxidil comes in four types: liquid, aerosol, foam, and minoxidil for beard treatment. Which one you choose depends on personal preference and the area of treatment.

Liquid minoxidil is the “original” and still widely used today. It contains propylene glycol, water, and alcohol, along with minoxidil.

It’s typically less expensive than other minoxidil types and many users say you need less liquid to cover an affected area as you do with foam.

Some minoxidil users experience adverse reactions to the propylene glycol found in minoxidil liquid, which is the main reason for the development of minoxidil foam.

It’s convenient to apply and many minoxidil users feel that the foam is less messy and less greasy than liquid minoxidil overall. It also dries quickly.

Aerosol minoxidil consists of a mixture of foam and liquid versions. It’s relatively easy to apply and comes in a 5% minoxidil formula. It’s not recommended for use by women.

Men with patchy beards may find it difficult to grow a full, lustrous face of whiskers. But minoxidil is among the products that may enhance beard growth, and scientific data shows that the 5% solution is effective for use on beards.

Check out Rogaine For Men if you think your beard hasn’t reached its full potential.

There’s no denying that minoxidil helps many men and women in the fight against hair loss. While it’s still not clear how minoxidil works for treating hair loss and spurring hair growth, it does work for a lot of people.

Here are some things to keep in mind as you consider whether to use minoxidil or not:

Some precautions for using minoxidil

As with any drug, you should take care when using minoxidil while also understanding its potential side effects.

Nanoxidil is similar to Minoxidil but it uses nanoparticles instead of a topical solution. Nanoparticles are tiny particles that are only a few nanometers in diameter (one nanometer is one billionth of a meter). Nanoparticles are used in everything from sunscreen to cosmetics because they allow for better absorption through skin cells than traditional delivery methods.

While minoxidil’s roots extend to the 1950s, nanoxidil is a newcomer regarding hair loss and hair growth treatments.

Released in 2011 by Divine Skin Inc., nanoxidil represented an alternative to minoxidil and, its creators and others claimed, more effective treatment for hair loss.

The difference between nanoxidil and minoxidil lies in their chemical structure. Nanoxidil has a different molecular weight from minoxidil, and is responsible for opening the ion channels in the scalp. Its weight helps it to absorb more deeply into the scalp.

Nanoxidil, unlike minoxidil, doesn’t have FDA approval, but it appears to have fewer side effects while producing positive results for men and women experiencing hair loss.

DS Laboratories, which includes nanoxidil in its Spectral DNC-N formula, says that 93% of people using nanoxidil saw a decrease in hair loss. 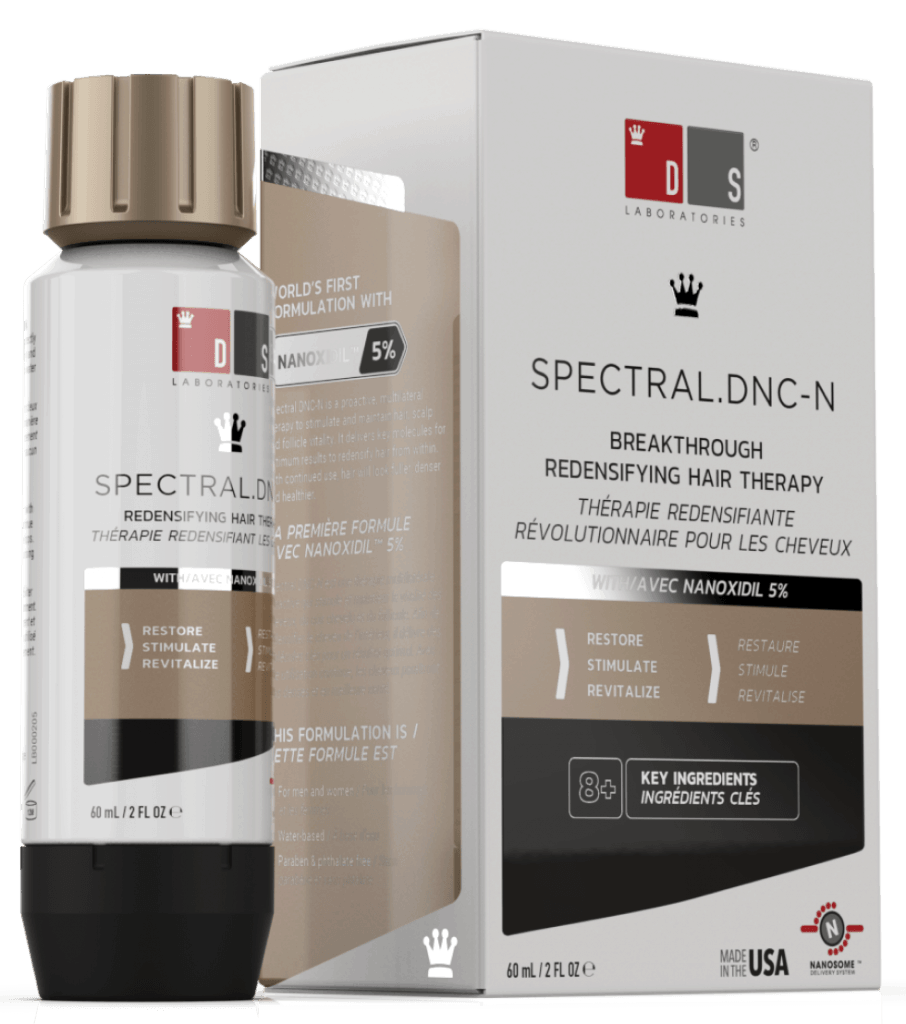 Spectral DNC-N is said to work continuously over 12 hours – longer than most other treatments for baldness – and includes the DS Labs’ unique nanosome delivery system that delivers key ingredients more deeply into the skin.

The key compounds in Spectral DNC-N block dihydrotestosterone, a sex hormone that can lead to hair loss, while also encouraging hair growth at the hairline (as well as at the crown).

While nanoxidil, and Spectral DNC-N, is effective in treating hair loss, there’s still not a lot of information or studies about it, including whether it may have long-term side effects.

But, again, its short-term side effects are less than those of minoxidil – if it has any side effects, at all.

Aminexil and stemoxydine are two other compounds that have a similar molecular structure as minoxidil. Both are the creations of L’Oreal, the cosmetic company.

Aminexil treats hair loss by improving blood circulation to the scalp. It also helps to prevent the hardening and scarring of hair shafts that may lead to hair loss. It’s often used in conjunction with minoxidil.

Stemoxydine is another chemical that works similarly to minoxidil. It stimulates hair cells stuck in the dormant phase to enter into the anagen phase to continue their growth. Stemoxydine comes in a liquid form and is suitable for men and women.

The stages of hair growth 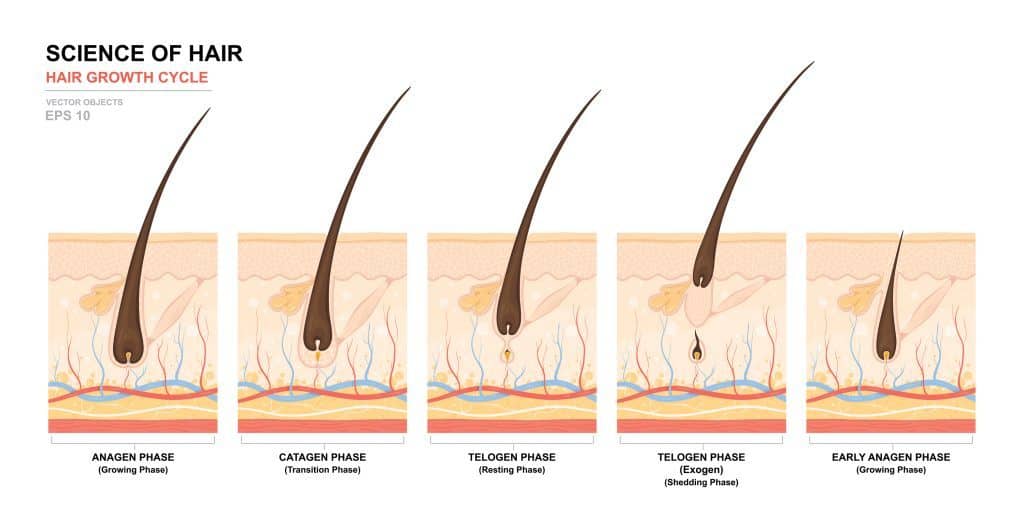 Part of understanding how hair products such as minoxidil and nanoxidil work is understanding the hair growth cycle. Considering that there are around 100,000 hair follicles on the scalp (and a whopping 5 million on the body).

As each follicle manufactures new hair, it pushes out the hair shaft to create longer hair. But not all hair grows at the same time, and each strand is in a different part of the cycle, which consists of four phases:

The anagen phase is when hair is growing and represents the first stage of the cycle. During this phase, the cells of hair bulbs divide rapidly and create new hair growth. Studies show that up to 90% of hair follicles are in the anagen phase at any given time.

The anagen phase doesn’t pass quickly, mind you, but lasts between two and seven years. The length of the phase determines maximum hair length; hence, people with long hair have a longer anagen phase than many others.

Many factors determine the length of each individual’s anagen phase, including genetics, age, overall health, and lifestyle factors such as nutrition.

Catagen is the transitional phase of the hair cycle and occurs after the anagen (growth) phase. It’s a short transitional phase that lasts two to three weeks and one in which hair stops growing and detaches itself from the blood supply.

The telogen phase is one of “hibernation” in which the existing hair rests while new hair begins to grow beneath it slowly. This phase lasts for three months and up to 15% of all hair is in it at any one time.

The final phase of the hair growth cycle is exogen in which hair sheds. Keep in mind that every hair on your head sheds eventually and most people lose 50 to 100 hairs each day.

Once hair sheds, the follicles transition back to the anagen phase where the cycle begins again.

It’s important to remember that, as mentioned, not every hair follicle is in the same phase at the same time. That’s a good thing considering that it keeps hair from shedding all at once.

Nanoxidil, the newer of the two, produces similar results as minoxidil (if not better) and doesn’t have the same side effects – although it’s too early to tell if it has long-term side effects.

Is one better than the other? That’s a topic of much debate and there really isn’t a conclusive answer. What’s clear is that both products can decrease hair loss and help users to develop a thicker, fuller head of hair.

Do you use minoxidil or nanoxidil? If so, what are the results? As always, we’d love to hear from you.

7 Things About Shaving Your Head (And When It’s Time)

The Hair Tattoo a.k.a. Scalp Micropigmentation: Should You Do It?

Hair Transplant: Should You Get One? (Everything You Need to Know)

Scalp Micropigmentation aka Hair Tattoo: Should You Do it?

Signs of Balding at 20

How Long Does it Take to Go Bald? The Answer May Surprise You

Why We Choose Spectral.DNC-N over Rogaine for Hair Loss